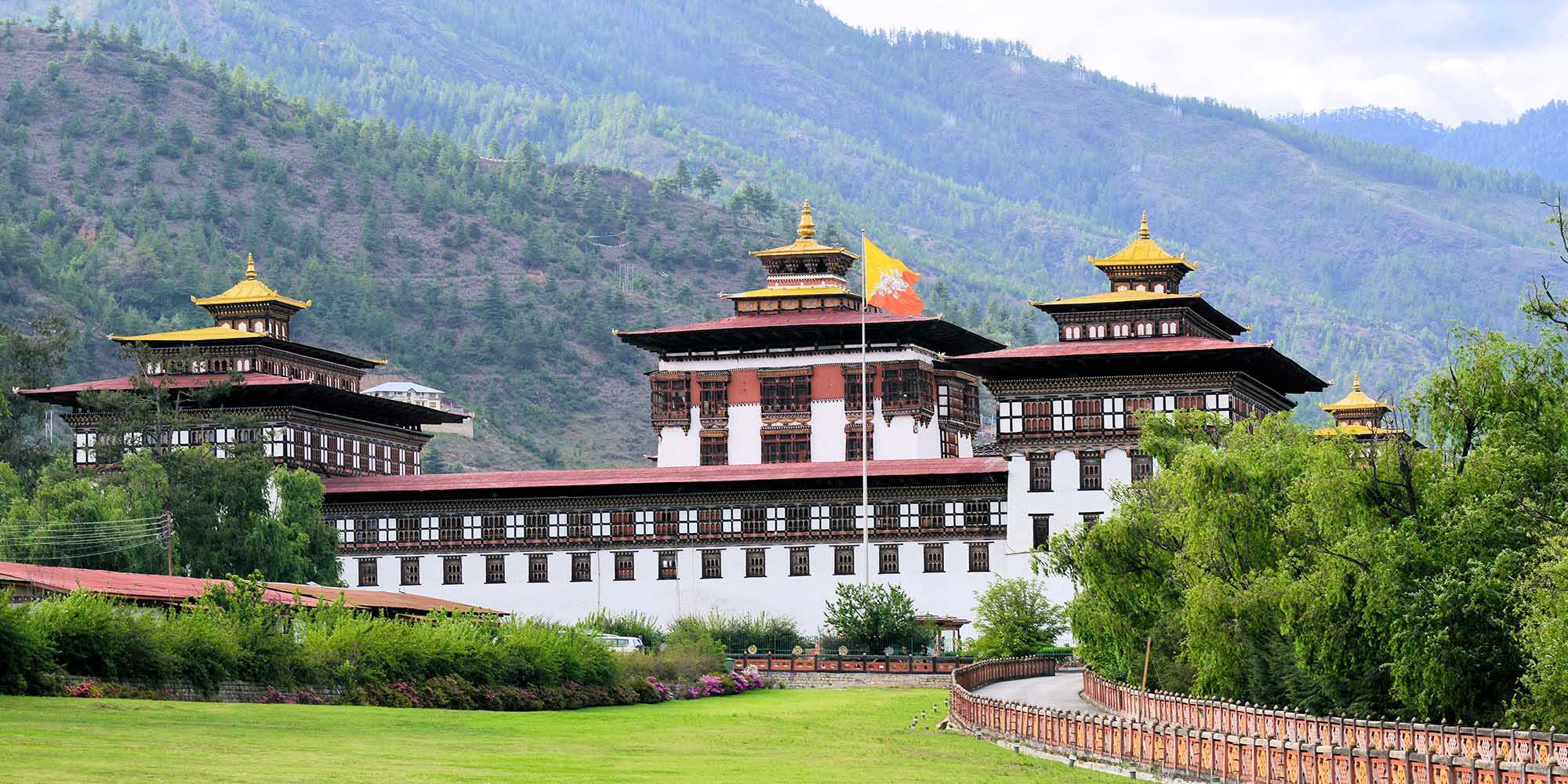 Tashichhoedzongབཀྲ་ཤིས་ཆོས་རྫོང is a Buddhist monastery and fortress on the northern edge of the city of Thimpu in Bhutan, on the western bank of the Wang Chu. It has traditionally been the seat of the Druk Desi (or “Dharma Raja”), the head of Bhutan’s civil government, an office which has been combined with the kingship since the creation of the monarchy in 1907, and summer capital of the country.It was built by the first Dharma Raja, who also founded the Lho-drukpa sect of Buddhism, which has remained the distinctive sect of Bhutan. The correct transliteration of the vernacular name—Bkrashis-chhos-rdzong, meaning “the fortress of auspicious doctrine”—is, according to Dr. Graham Sandberg, Tashichhoidzong. 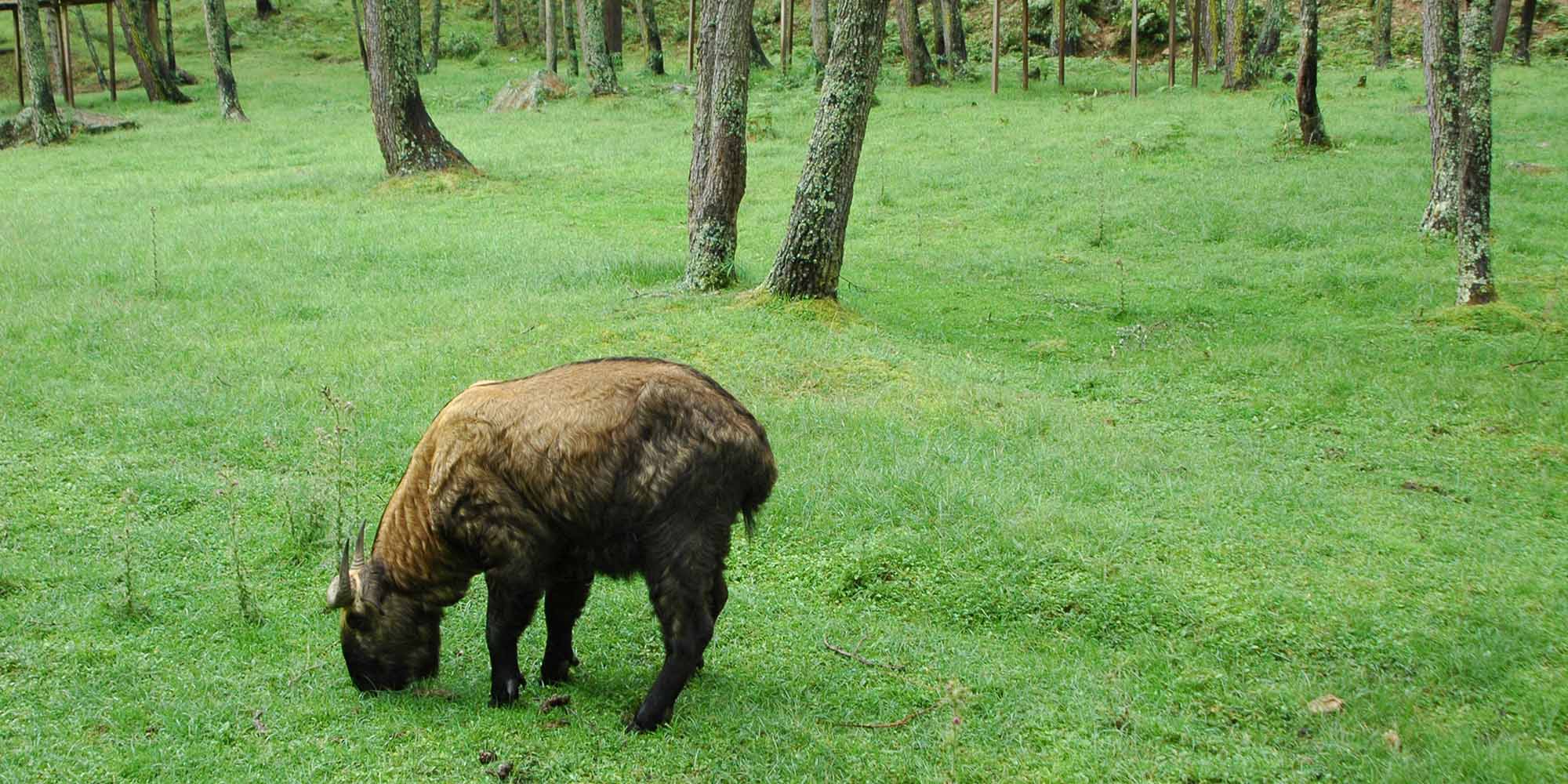 Motithang Takin Preserve, located in the Motithang district of Thimphu, Bhutan is a wildlife reserve area for takin, the National Animal of Bhutan. Originally a mini-zoo, it was converted into a preserve when it was discovered that the animals refrained from inhabiting the surrounding forest even when set free. The reason for declaring takin as a National Animal of Bhutan on 25 November 2005 (Budorcas taxicolor) is attributed to a legend of the animal’s creation in Bhutan in the 15th century by Lama Drukpa Kunley. 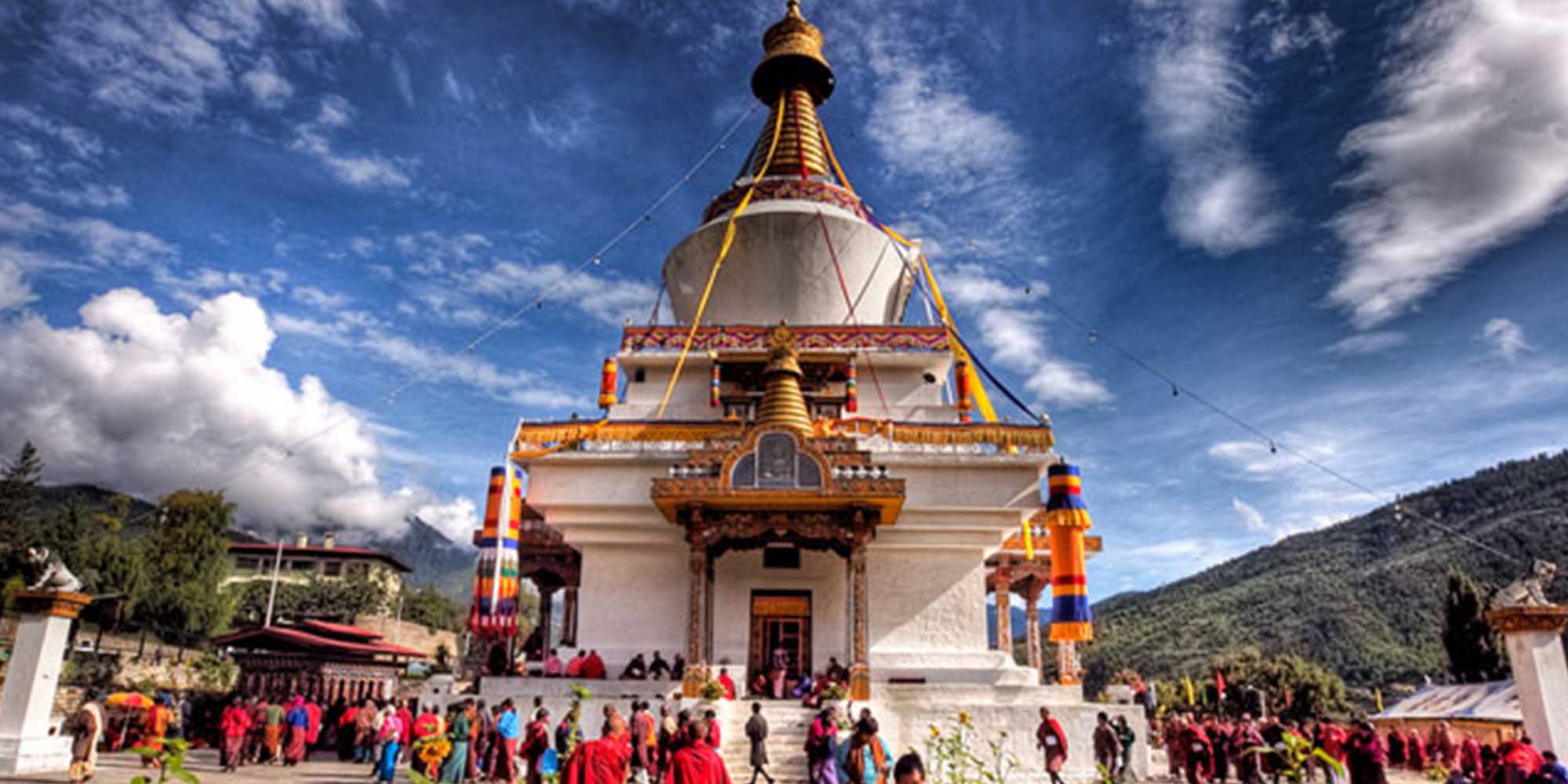 The Memorial Chorten, also known as the Thimphu Chorten, is a chorten in Thimphu, Bhutan, located on Doeboom Lam in the southern-central part of the city near the main roundabout and Indian military hospital. The chorten, built in 1974 to honour the 3rd King of Bhutan, Jigme Dorji Wangchuck (1928–1972), is a prominent landmark in the city with its golden spires and bells. In 2008, it underwent extensive renovation. It is popularly known as “the most visible religious landmark in Bhutan”. It was consecrated by His Holiness, the Late Dudjom Rimpoche.This chorten is unlike other chortens as it does not enshrine the mortal remains of the late King. Only the King’s photo in a ceremonial dress adorns a hall in the ground floor. The King when he was alive wanted to build “a chorten to represent the mind of the Buddha”. 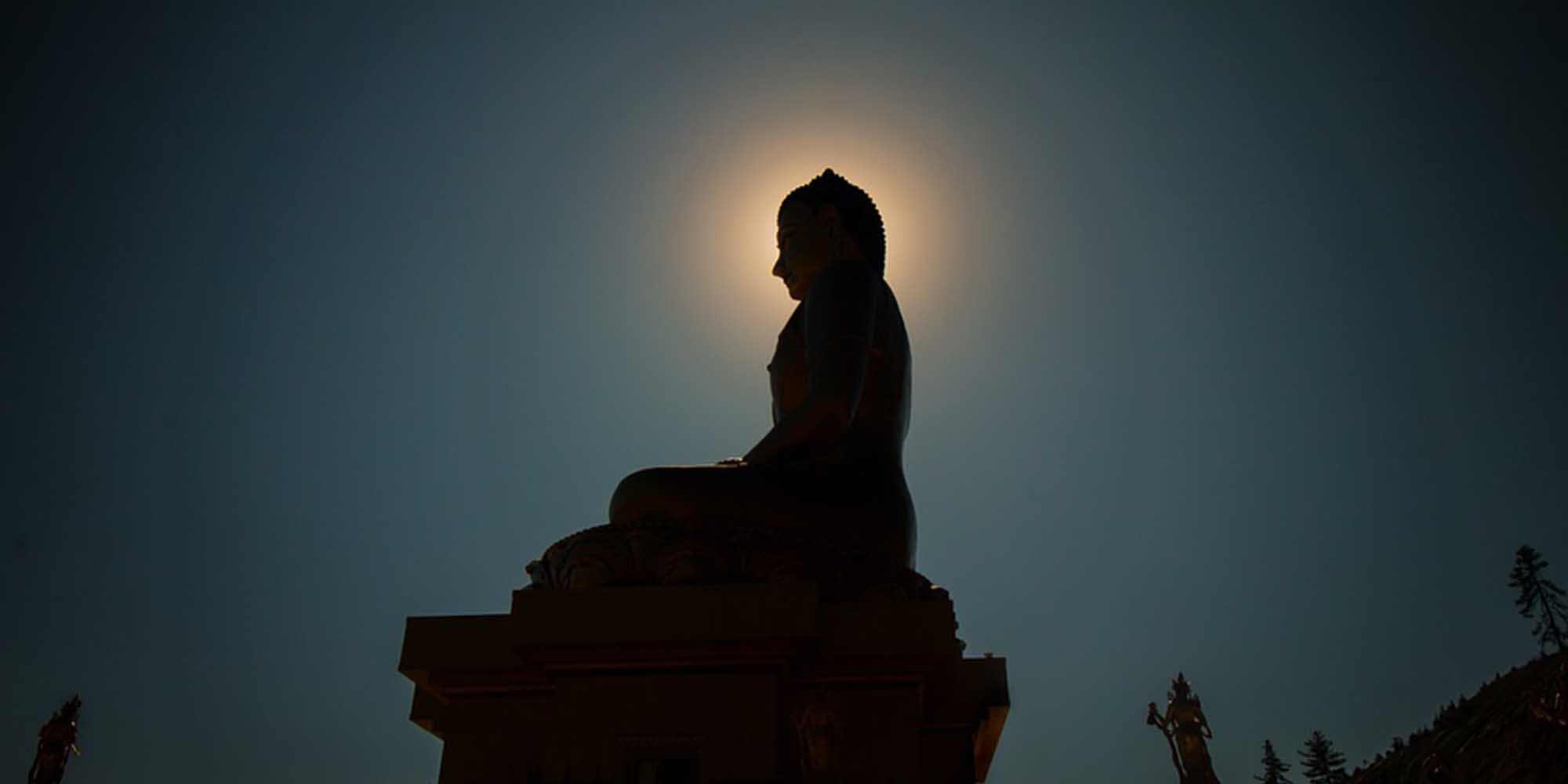 Buddha Dordenma at Kuenselphodrang is a gigantic Shakyamuni Buddha statue under construction in the mountains of Bhutan. The statue will house over one lakh (one hundred thousand) smaller Buddha statues, each of which, like the Buddha Dordenma itself, will be made of bronze and gilded in gold. The Buddha Dordenma is sited amidst the ruins of Kuensel Phodrang, the palace of Sherab Wangchuck, the thirteenth Desi Druk, overlooking the southern approach to Thimphu, the capital of Bhutan. Upon completion, it will be one of the largest Buddha rupas in the world, at a height of 169 feet (51.5 meters). Although its completion was planned for October 2010, construction is still ongoing as of December 2011.The statue alone is being built at a cost of US$47 million, by Aerosun Corporation of Nanjing, China, while the total cost of the Buddha Dordenma Project is well over US$100 million. The interior will accommodate 100,000 8-inch-tall and 25,000 12-inch-tall gilded Buddhas respectively. Names of sponsors will be displayed in the meditation hall which forms the throne of the Buddha Dordenma.

Apart from commemorating the centennial of the Bhutanese monarchy, it fulfills two prophecies. In the twentieth century, the renowned yogi Sonam Zangpo prophesied that a large statue of either Padmasambhava, Buddha or of a phurba would be built in the region to bestow blessings, peace and happiness on the whole world. Additionally the statue is mentioned in the ancient terma of Guru Padmasambhava himself, said to date from approximately the eighth century, and recovered some 800 years ago by terton Pema Lingpa.

Under the eyes of the Buddha statue, the Kuenselphodrang nature park was formally opened as a recreational park in 2011. The park conserves 943.4 acres of forest area that surrounds the Buddha Dordenma statue. 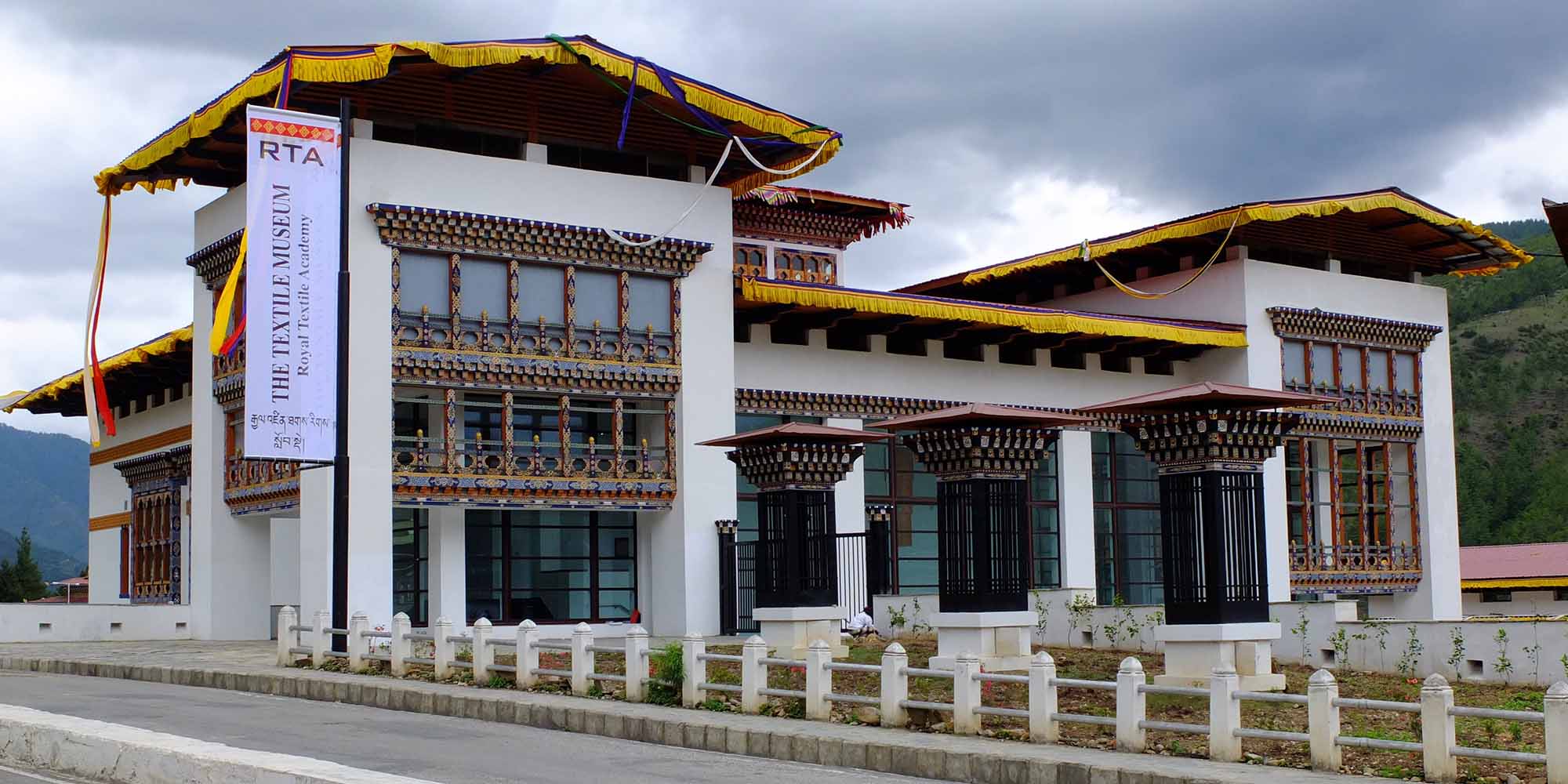 The Bhutan Textile Museum or the National Textile Museum is a national textiles museum in Thimphu, Bhutan, located near the National Library of Bhutan. It is operated by the National Commission for Cultural Affairs. Since its establishment in 2001, the museum has generated national and international attention and has garnered a substantial collection of antique textile artefacts, exclusive to Bhutan.

The objective of setting up the museum is to promote Bhutan’s achievements in the field of textile arts and to sustain and promote interest of the weavers to continue the traditional textile patterns. The museum also envisions to become the centre for textile studies and research. The purpose is also to promote the history and culture of Bhutan.